Queens is the world’s most ethnically diverse urban environment, but it also addresses its mail a little differently. House or building numbers will by hyphenated (even though they don’t really need to be), and your "city"—rather than being the name of the borough, like every other borough in New York City—will be a local Queens neighborhood. What gives?

The answer isn't quite as satisfying as learning why stationary drivers honk, but does offer a similar tribute to the power of sheer, cussed resistance.

The commonly told story about why Queens residents have their bills and magazine subscriptions and such sent to Jamaica or Astoria or Long Island City centers around how the five boroughs we know today merged into a single New York City in 1898. Unlike Brooklyn or Manhattan, which each already consisted of a single municipality, in the late 1890's Queens County still comprised several different political divisions, most of which had familiar names like Flushing, Jamaica, or Long Island City.

Queens had an overall bumpy transition to borough-hood. There was resistance to consolidation on several fronts: for instance, Patrick "Battle Axe" Gleason, the mayor of Long Island City who had failed in his bid to become mayor of the newly enlarged New York, decided the merger was unconstitutional and refused to leave office. And the new Borough of Queens consisted of only half of the old Queens County; for a year, the two jurisdictions awkwardly overlapped, with the county government having no real authority over the city portion, where the majority of its population lived. (The rural rump was eventually reorganized into Nassau County.) That lack of a coherent pre-consolidation Queens identity, most people will tell you, is why those original towns and villages are still used as names by the Postal Service.

There’s a few wrinkles in this explanation. The first is that Queens wasn't the only county full of smaller divisions to join New York in 1898. The Bronx didn't have any sort of pre-consolidation unity, not even as a county: the western portion had been grafted onto New York from Westchester County even before consolidation, in 1874, when it became known as "the Annexed District"; only after another chunk of the Westchester had been gobbled up in 1898 did the mainland portion of the city come together as a distinct separate entity. Staten Island was divided into five different towns at the time of consolidation; as late as 1929, the Harvard Alumni Directory gave Staten Island addresses that included the name of an individual community (e.g., "73 Miles Ave., Great Kills, Staten Island, NY"), which you would never see written out that way today.

The other clue is that Queens delivery names don't only consist of those original pre-1898 municipalities. Yes, you can address your postcards to "Battle Axe" Gleason's Long Island City or the long-deceased Town of Flushing. But you can also send it to places like Rosedale and Bellerose, which didn't exist before the 20th century. The old Queens towns are part of the story, but not the whole thing. 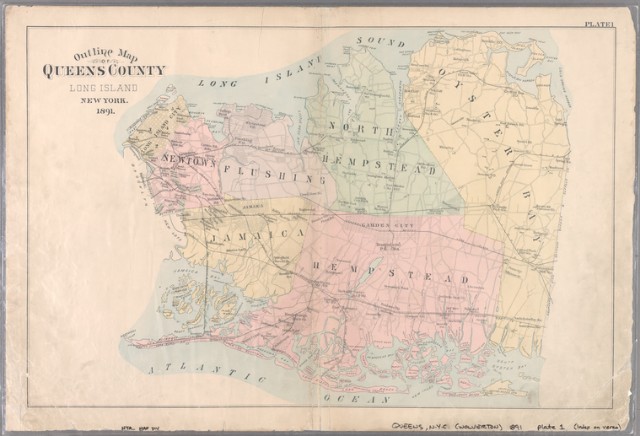 What's In A Name?

The US Postal Service has always been a federal institution, and Post Offices have always been established and expanded to follow population growth and settlement patterns, and to best serve where people live. That means that the areas they serve haven't always matched up with boundaries of municipalities and local governments, or even people's local understanding of their communities, and sometimes inertia meant Post Offices didn't keep up with changes in the local political landscape. Sometimes Post Offices even ended up defining those communities, with the name selected for a new local Post Office ultimately coming to also denote the town growing up around it. At several points the postal authorities had to urge local postmasters to not name the offices they ran after themselves.

Another historical factor is that traditionally there was no systematically defined way to address a letter. Until the mid-19th century, people came to collect their mail rather than receiving it at home, so usually just the recipient's names and the name of the local Post Office would suffice. Home delivery wasn't nationwide until 1905, and even then street addresses were often optional: in many places, local postmasters would know all their customers by name.

New York City, of course, has never been like most places. It was the first place in America where local branches served as substations for a main Post Office, but others quickly followed suit, and soon postal delivery in big cities began to grow increasingly complex. Then World War II hit and many of the men who had worked in the Post Offices joined the military just as business and administrative mail spiked. To make the job of sorting the mail easier, the Postal Department imposed a series of two-digit postal zone codes in major cities.

This page from the New York City 1949 Five Borough Street Atlas shows how things stood just a few years later, with details on the seven Post Offices which, with their innumerable branches, served the city: New York (which included Manhattan and the Bronx), Brooklyn, Staten Island, and the four Post Offices that covered Queens: Jamaica, Long Island City, Flushing, and Far Rockaway. These roughly — but only roughly — corresponded with the original Queens towns of the same names.

Why did these four never consolidate? The answer isn't clear. It may have something to do with the sheer size of the borough — at 109 square miles, by far the largest of the five — or its lateness to urbanization, which meant that its population hadn't been centralized. Much of Queens had only been built up in the previous two decades as the subway expanded out into farmland. Flushing and Far Rockaway didn't even get to be part of the Postal Department's big-city two-digit zone code initiative.

And below the level of those old town names were the innumerable neighborhoods that still grace the names of Queens-bound envelopes. To understand how those work in practice, we need to look at how the Postal Service thinks about geography today.

Here's a dirty little secret about mail: you can put literally any city or state you want on the address label, and as long as you get the zip code right, it will probably get to the right spot.

The zip code, rolled out in 1963, extended the 1943 system, with two-digit postal zone code becoming the tail end of a new five-digit code, and the new regime being spread everywhere in the country. Every address now has a zip code, and, more to the point, that zip code is the only location information other than the street address the Postal Service actually needs to deliver a letter or package.

Nevertheless, the Postal Service continues to associate at least one city name with each zip code. That name is called the preferred or recommended city; there might also be one or more alternate cities in a zip code.

You can use usps.com to look up what those names are for any zip code you can think of. Put in a zip code from a non-Queens borough and you'll get just one recommended city: the name of the borough itself.

In some cases, you'll be specifically told what city names not to use. My college girlfriend, a Bronx native who graduated from the borough's private Horace Mann School, didn't like it when the school letterhead started using the tonier-sounding "Riverdale" instead of "Bronx" in the address on its letterhead. Hopefully she's happy that the Postal Service shares her irritation: 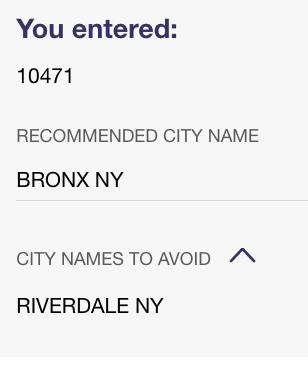 In Queens, though, the Postal Service is unable to impose borough-wide uniformity. You could call 11369 Flushing, after the Post Office that serves it; or you could call it East Elmhurst, which is what the locals call it. Just don't call it Queens.

This glorious diversity in naming is not the Postal Service's ideal choice, which we know because, in living memory, they tried to get rid of it. In 1995, they dumped all those local, particular Queens neighborhood names from their database and replaced them with just the names of the four big Post Offices in the boroughs.

People hated it. What followed was a three-year revolt that roped in the Queens Tribune weekly ("I live in Woodside and I do not wish to be a Flushingite" sniffed one letter to the editor) and local political players: Gary Ackerman, the Congressman at the time, dedicated a paragraph in his official House bio to the fight.

You can see why the Postal Service would want to rationalize things; maintaining and updating an enormous database takes resources that they'd undoubtedly prefer to spend elsewhere. (In "The Untold Story of the Zip Code," the agency notes somewhat passive aggressively that the zip code system, which has become crucial to industries from private shipping to insurance, "exists out of pure good will" and that "no specific appropriation has ever been made for its development.") But ultimately, they were no match for the people of Queens, or at least that portion of the people of Queens who cared enough to loudly raise a stink about it. There are still disputes over exactly which neighborhoods should go with which zip codes, but ultimately Queens alone has unique names for its postal "cities" for one reason only: because the people who live there are used to it and like it that way.