The NYPD officer accused of using an illegal chokehold that ended Eric Garner’s life has been found guilty of misconduct in a police disciplinary trial—the final stages of a case that has defined police-community relations in New York City under Mayor Bill de Blasio.

The administrative judge overseeing the case, Deputy Commissioner Rosemary Maldonado, has recommended that Officer Daniel Pantaleo be fired, according to a source familiar with the decision. Judge Maldonado found him guilty of using an illegal chokehold, but not guilty of intentionally obstructing Garner’s breathing, the source said.

The attorneys on both sides now have two weeks to comment on Judge Rosemarie Maldonado’s decision. Then her decision and the attorneys’ comments go to Police Commissioner James O’Neill, who has final say on whether to accept the recommendation or decide on a different outcome.

Mayor de Blasio is expected to hold a City Hall press conference at 1 p.m. to comment on the case.

“My family and I have been fighting for five long years for justice and accountability for Eric’s murder—and Mayor de Blasio and the NYPD have put up roadblocks and delays every step of the way," Gwen Carr, Garner's mother, said in a statement.

"It brings me some relief to learn that Judge Maldonado has recommended that Pantaleo be fired—but the recommendation is long overdue, I’m still not allowed to see Maldonado’s report and we still have a ways to go before there is true accountability for Eric’s murder. It’s past time for Mayor Bill de Blasio and the NYPD to end their obstruction, stop spreading misleading talking points and finally take action for my son."

“My son deserves more than recommendations; he deserves justice. New Yorkers deserve to know that police who kill our children and those who try to cover it up will be fired from the NYPD so that they don’t get paid with our taxpayer dollars to be a danger to us. I will continue to fight—and I’m asking everyone who supports me in NYC and around the country to continue to fight—until there is accountability for Eric and for all New Yorkers, and until Pantaleo and all of these officers who engaged in misconduct related to Eric’s murder have been fired from the NYPD.”

"All of New York City understandably seeks closure to this difficult chapter in our City’s history," Walzak said. "Premature statements or judgments before the process is complete however cannot and will not be made. In order to protect the integrity of the trial proceedings and conclusion, the NYPD will not comment further until the Police Commissioner makes the final determination.”

The chair of the Civilian Complaint Review Board (CCRB), Fred Davie, seemingly confirmed the judge's decision in a statement.

“Today’s decision confirms what the Civilian Complaint Review Board always has maintained: Officer Daniel Pantaleo committed misconduct on July 17, 2014, and his actions caused the death of Eric Garner," Davie said.

“The evidence the CCRB’s prosecutors brought forth at trial was more than sufficient to prove that Pantaleo is unfit to serve. Commissioner O’Neill must uphold this verdict and dismiss Pantaleo from the Department, as was recommended by both the CCRB and the Deputy Commissioner of Trials.”

"The only hope for justice now lies with Police Commissioner O’Neill. He knows the message that this decision sends to every cop: we are expendable, and we cannot expect any support from the city we protect. He knows that if he affirms this horrendous decision, he will lose his police department," Lynch said in a statement.

Garner was 43 when Pantaleo tried to arrest him for allegedly selling loose cigarettes on the sidewalk on Bay Street, a commercial strip in the Tompkinsville neighborhood on Staten Island’s north shore, near the ferry terminal. Garner accused Pantaleo and his partner of harassing him and waved his arms in the air in protest. Pantaleo wrapped his forearm around Garner’s neck to bring him to the ground.

The fatal confrontation exploded into public view in July of 2014 with a shocking cell phone video, first posted by the Daily News, that showed Garner gasping for air and repeating the words “I can’t breathe” 11 times.

Numerous officers ignored his cries—during the disciplinary trial, a few testified that they thought he was “playing possum.” But the phrase “I can’t breathe” became a rallying cry for protesters across the nation, and a broader statement for many about the relationship between African Americans and police.

The case was emblematic of the deep mistrust of police within the black community in the age of mass incarceration. It came at a time of a fierce nationwide debate about race and criminal justice and posed a tense challenge for Mayor Bill de Blasio, less than a year after he took office on a promise to improve police-community relations.

Garner’s family repeatedly expressed frustration at how long it took for the disciplinary process to play out, but it remains the family’s last chance at some form of accountability.

Both federal prosecutors and a Staten Island grand jury declined to prosecute Pantaleo criminally. It took five years for the police department to mount a disciplinary trial; Mayor de Blasio has said the city was waiting for the U.S. Justice Department to act.

Pantaleo was eventually charged internally by the NYPD with violating the Patrol Guide’s prohibition on chokeholds and impairing Garner’s breathing. In order to prove their case, prosecutors had to show by a preponderance of evidence that he committed the crime of attempted assault or strangulation. They also needed to show his actions were either reckless or intentional.

Judge Maldonado’s decision and recommendation was supposed to remain confidential under a controversial state law known as 50-A, which protects an officer’s personnel records. In a recent court case, the New York Civil Liberties Union argued that the documents generated during a disciplinary proceeding should remain public as long as an officer’s name was redacted. The state’s highest court disagreed and they lost the case. 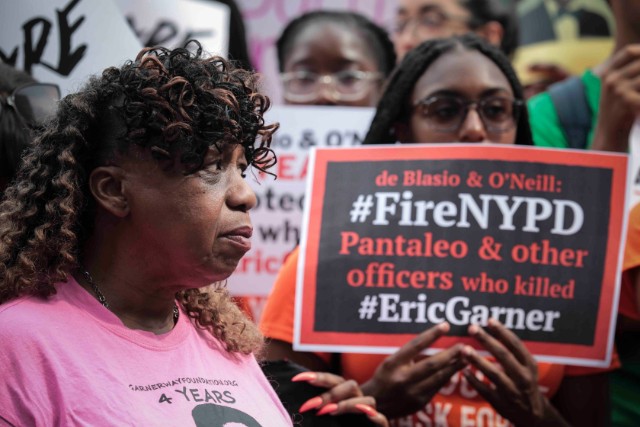 The disciplinary trial started in May, when a senior forensic pathologist testified that a chokehold and chest compression triggered an asthma attack, cardiac arrest and ultimately, Garner’s death. Dr. Florina Persechino called it a “lethal cascade” of events.

The CCRB prosecuted the case and during the trial their lawyers said Pantaleo locked his hands together and attempted to squeeze Garner’s neck instead of waiting for backup that was moments away. Defense attorneys argued Garner was a “ticking time bomb” who was morbidly obese, had an enlarged heart and caused his own death when he resisted arrest.

The disciplinary proceeding was full of emotional moments, including the revelation that Pantaleo’s supervisor, Lt. Christopher Bannon, texted “Not a big deal, we were effecting a lawful arrest,” after being told that Garner was most likely dead. Bannon said he was not trying to be malicious but instead was trying to put the officers at ease. When the viral video was first played in the trial room, Garner’s mother and sister left sobbing.

At the time of Garner’s death, de Blasio appeared with Police Commissioner Bill Bratton at his side and both men promised a full investigation. Bratton, who has since retired, said he reviewed the video, and Pantaleo was put on desk duty.

“This would appear to have been a chokehold,” Bratton said—a dangerous tactic that has been banned by the NYPD for two decades.

Protesters took to the streets and the Rev. Al Sharpton took to the airwaves from his podium in Harlem, accompanied by Garner’s widow, Esaw Garner, and mother, Gwen Carr.

In the five years since her son died, Carr also lost her grand-daughter Erica, who was Eric Garner’s daughter. Erica Garner also became an activist in the wake of her father’s death but died of an asthma-related heart attack in 2017. She was 27. And last week, Carr’s husband, Ben, died of a heart attack in Jamaica while attending his daughter’s wedding.

Over time, Carr became a vocal activist and was a constant presence at Pantaleo’s disciplinary trial, where she would hold regular press conferences with supporters who would often shout down Pantaleo’s defense team and police union bosses.

The PBA staunchly defended Pantaleo and blamed the incident on top brass who ordered the officers to crack down on the sale of illegal cigarettes after shop owners complained. Stuart London, Pantaleo’s defense attorney, argued that Pantaleo did not use an illegal chokehold on Garner but instead used what’s called a seatbelt maneuver, where one arm goes underneath a suspect’s arm and the other across the chest, like a seatbelt. London said Pantaleo’s arm pulled on Garner’s neck only after the two nearly fell into a storefront window. He also said it was a misconception that Pantaleo’s arm was around Garner’s neck when Garner called out that he couldn’t breathe.

Federal prosecutors gave a similar explanation when they announced their decision not to prosecute Pantaleo on criminal civil rights charges last month, the day before a five-year statute of limitations was to expire. The US Attorney for the Eastern District, Richard Donoghue, said prosecutors could not prove officer Pantaleo’s actions were willful.

“Mr. Garner’s death was a terrible tragedy,” Donoghue said. “But having thoroughly investigated the surrounding circumstances, the Department has concluded that the available evidence would not support federal civil rights charges against any officer.”

The timing of the announcement, as well as the decision itself, infuriated the Garner family.

“We’re going to keep fighting. We’re not going away,” said Carr. “So you can forget that!”

This story is being updated as we receive more information.