David Chang's Momofuku empire may always be anchored at that first, funky East Village ramen joint of the mid-aughts, but these days the star restauranteur seems to only open shiny new things in the city's most corporate environments. In fact, Chang's last five NYC launches have been in the Time Warner Center (Noodle Bar 2.0 and Bāng Bar), Hudson Yards (Kawi and Peach Mart), and, with the brand-new Bar Wayō, at the now-aggressively sterile Pier 17, jutting out over the East River at the South Street Seaport.

That Chang and crew continue to pull it off—all five of those places serve great food and are well worth a visit—is a testament to the talent of his chefs and their collective refusal to play it safe, or dumb down their flavors, no matter their audience.

Take, for example, the snacks section on the Wayō menu, a likely entry point for many as the place touts itself to be as much bar as restaurant. Topping the list is chef Sam Kang's strange and wonderful Curry Donut, a crackling, coconut-crusted disc of fried dough stuffed with a chunky mushroom and tomato paste. It's heavy, it's complicated, it's spicier than you expect, and, even though it's the cheapest thing on the menu, it's no one's idea of an easy crowd-pleaser.

Also exceedingly snackable while sucking down a couple of $15 cocktails is the Squid Seca, an overflowing bowl of dried cephalopod, seasoned peanuts and cashews, rice puffs and chips, whole cloves of roasted garlic and ridiculously fiery Thai chilis. It all tastes great and is fun to eat, and even that old standard fried Onion Rings throws a twist your way, as the crisp, lightly-battered rings are served with zesty homemade ranch and a heap of trout roe.

Kang's Hamburg Dip confounds your bar-burger expectations with its rectangular shape
(it's served on a crusty hero roll) and side of beefy broth for, obviously, dipping the already quite gloppy sandwich. It also doesn't come with fries, but rather a ball of decent potato salad. The Wayō Wings is probably the menu's most ordinary-looking dish, though it's also a big winner, the large, incredibly juicy pieces of chicken lively with Kang's dry rub.

The only dish I most likely would not order again is the sweet and bready Imitation Krab Roll, which felt like a wasted opportunity to eat something much better... such as the Clam Soup, a Rhode Island-style chowder (not creamy, not tomatoey), which is based on General Manager Emma Conroy's hometown favorite. Don't be fooled by the pair of shells floating in the murky broth, there are a lot more fat, tender bivalves hiding in there.

Maybe the best thing I ate over two large dinners was Kang's Half Smothered Royale, his own personal nostalgia trip, a platter of well-done mushroom omelet dumped over rice and topped with lots of rich, thick sausage gravy. The gentleman who delivered it to our table bragged about its hangover-curing abilities, but all I know is that it tastes fantastic. For dessert, we had the Rice Pudding (the other option is Ambrosia), and while it's a perfectly fine example of that generally underrated treat, it didn't quite deliver the sugar bomb we were looking for.

So there's a lot of excellent food at Wayō-—I would consider it a destination dinner spot—but since they are also clearly proud of their cocktail program, headed by Lucas Swallows, I ordered, and happily downed, the non-alcoholic Tiki Punch, a tart and refreshing concoction made with pineapple, passion fruit, and Chinese five-spice. My companion enjoyed her considerably boozier Red Cap & Speedo, proclaiming it to be "like a really good negroni." 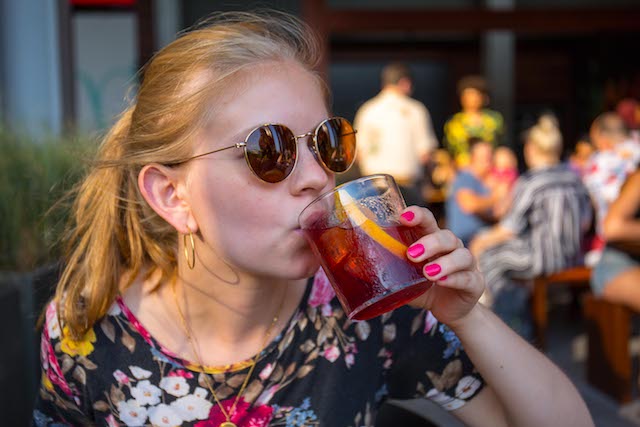 Wayō's physical space is divided into two sections. Inside is Wayō's bar area, with room for 30 or so at the curving bar and various stand-up counters. The patio outside is the place you want to be on a nice evening—the views are pretty unexceptional, and there's a nice breeze from the harbor—and it can accommodate about 50 people at communal tables with backless benches, or padded booths. If there are just two of you, try to get one of the small tables, which come with roomy, comfortable chairs. When winter arrives (or the next big storm) they can roll down a series of massive windowed garage doors to keep the elements at bay.

Wayō's home, the somewhat-controversial Pier 17, is crawling with tourists, of course, and littered with dumb Insta-bait murals and bad installation art. But the massive Riverdeck on the north end of things, a public space newly opened this summer, is a shockingly pleasant place to hang out for a bit, with ample seating and a perfect view over the river up to the Brooklyn Bridge. You can buy beer back here, too, from one of the Pier's "founding sponsors," and there was a DJ on both Saturday and Sunday night, but it's all pretty low key. 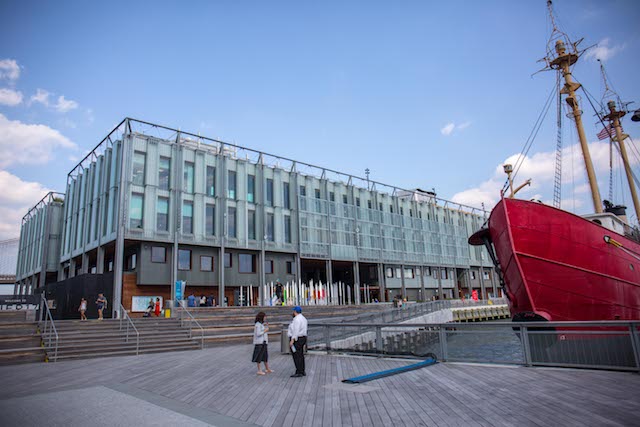