Vegan versions of fast food classics have been rolling out through chains with the introduction of plant-based products like Beyond Meat and Impossible Burgers. And Dunkin' (née Dunkin' Donuts) is the latest to offer a meat-free version of one of their staples: the sausage, egg and cheese breakfast sandwich.

This is thanks, in part, to DeAndre Jordan—NBA All-Star center, Olympic gold medalist, and one of the newest members of the retooled Brooklyn Nets. Jordan was at Dunkin' on Wednesday morning to help launch their new Beyond Sausage Breakfast Sandwich, made from Beyond Meat's plant-based ingredients and a "mix of spices crafted especially for Dunkin'," according to a press release. (He was also there spinning a small novelty basketball on his finger, which is a lot harder than it looks!)

Jordan is vegan—and an investor in Beyond Meat, which has seen its stock price go up by 720% since it went public in May. He spent part of his appearance at the store posting stories on Dunkin's Instagram account, telling followers, "My body is feeling awesome. I've never been healthier. I've converted a lot of my family and friends over, and slowly but surely they're converting."

Jordan has previously linked his interest in going vegan to being conscious of his body as an athlete. He told CloseUp360, "For me, I care about my body, so whatever I put in it, I want it to be good to where I want to produce that. I'm a true believer in whatever I put in my body, that's what I'm going to produce."

Many athletes, like Jordan and, most famously, Tom Brady, are hyper-vigilant about what they eat. Maybe that's also why, in a surreal moment, former Mets player David Wright showed up at the Dunkin' to try to sandwich. (Wright, it turns out, is also an investor in Beyond Meat, though his appearance was not announced.) 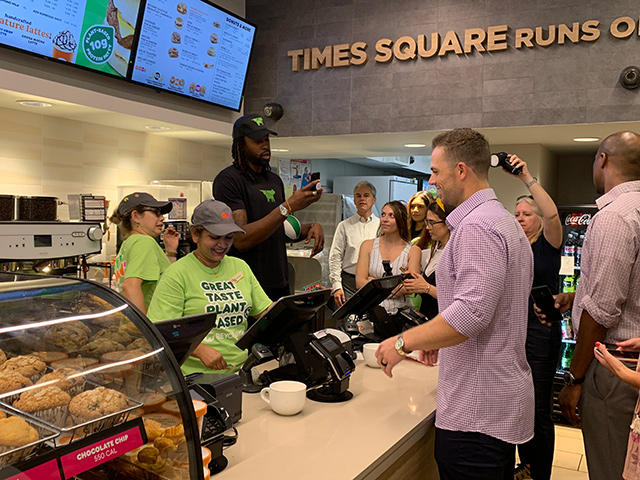 With athletes and other celebrities inspiring healthier lifestyles, more and more chains are offering pilots with or totally committing to adding plant-based meats on the menu. Impossible Burgers are being sold in select Burger Kings (which has translated into supply problems for other customers). Canadian chain Tim Hortons offers both Beyond Meat breakfast options and a Beyond Meat burger. (Chipotle, on the other hand, says Beyond Meat and Impossible Burger are too processed for them to use, which prompted Beyond's CEO to invite Chipotle's leader to tour their factory.)

Now Dunkin' has rolled out the Beyond Sausage Breakfast Sandwich to 163 locations in Manhattan. The sandwich is a sausage, egg, and cheese on an English muffin, priced at $4.29; it's also available without egg and cheese for a vegan option. When asked if he was a breakfast person, Jordan said, "I have to be a breakfast person. Because of how much and how hard we work out... I probably had like four sandwiches today... I'm good on breakfast now, though." 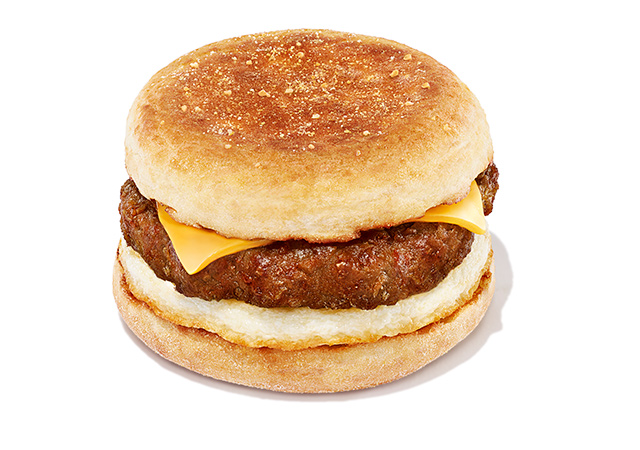 "The product is really good," Jordan told Gothamist in a brief interview. "From an environmental standpoint, it's huge for us as people," he added, referring to Beyond Meat's claims that plant-based "meats" require half the energy, much less water, etc. than real meat. (As for what the sandwich tastes like, the carnivores on the Gothamist team agreed it tasted pretty much just like an actual pork sausage sandwich.)

Jordan wasn't sure why the product wasn't being rolled out in Brooklyn, the borough of his new team, but he was able to talk a little about the upcoming season.

"We've got a lot of talent on this team," he said. "You know obviously Kevin [Durant] had a tough injury, he's going to be out for a while, but he's progressing great, he's recovering fast, we'll be even better when we get him back and healthy."

The addition of Jordan, Durant, and Kyrie Irving (fellow vegan and Beyond Meat investor) to the Nets has suddenly made the team one of the most exciting in the NBA, and definitely more dynamic than their crosstown rivals, the Knicks.

The Knicks had tried to attract top talent, but failed spectacularly during free agency this summer. Jordan, who spent the last months of the 2018-2019 playing for the Knicks, said that the culture the Brooklyn Nets have been building has been attractive. "Not to knock the culture the Knicks are creating," he said, "but we like what [Nets coach] Kenny [Atkinson]'s doing and [general manager] Sean [Marks]'s been awesome and the organization, from top to bottom, has been great. So you want to be a part of something like that, especially when you have a chance to play with other great players and build something."

The 6'11" Houston native is embracing his new town. "I love that you can walk everyone," Jordan enthused. "I've become a huge fan of the subway, even though I've gotten lost... well, not lost, but went the wrong direction on the subway a couple of times."

"The people, the fans are extremely into basketball, they know the game, and they are very passionate," he said. "As a player, that's the fanbase you want."

The Nets' first pre-season game is October 4th in Brooklyn.