Are concrete streets to blame for the exceedingly swampy temperatures which have overtaken the city in recent weeks? Or is it more than just a coincidence that this heat wave has coincided with the filming of Steven Spielberg's much-anticipated remake of quintessential NYC musical West Side Story? Spielberg and his crew have certainly done a fantastic job of picking the hottest days of the summer to film on the streets of Manhattan. No sweat stains will have to be CGI'd into the "America" number, as you can see below—now that's what you call verisimilitude.

Here's a video that's been floating around the Internet, so I thought I'd share it.

Filming of the finale of "America". This looks AMAZING! ! !

The movie, which is scheduled to come out in December 2020, has been filming around New York for the last month under the name "San Juan Hill" (the original 1961 West Side Story film was shot in the old San Juan Hill neighborhood of the Upper West Side, which is now the Lincoln Square area). The film has largely kept to Manhattan, with shoots at East 131st Street (the "America" scene), West 107th Street (where they filmed "Maria"), St. Nicholas Avenue between 111th and 113th Streets (see photos here), and other parts of Harlem.

They've also been spotted filming at Avenue P and Hendrickson Street, as well as Flatbush Avenue in Brooklyn, and also in Queens (see the photos in the gallery up above). As was the case with other recent Spielberg shoots in NYC (see Bridge Of Spies, The Post), the streets where the shoots take place are always filled with the hum of beautiful vintage cars, as if they were heralding the coming of a sure-to-be Oscar-nominated period piece.

A friend @dougthorson posted a video from the set of Spielberg's new West Side Story in Harlem. pic.twitter.com/jJzSkuwWm8

Unusual morning watching a movie... The new West side story from Spielberg, coming out in 2020 pic.twitter.com/rgxjLQ5KRl

You can see Spielberg on set in Harlem, visited by Spike Lee, in the video below.

"It can be a little overwhelming," Brian d’Arcy James, who plays Office Krupke, told People about working on such an iconic remake. "I think everyone’s so intoxicated by being there, that I think it’s going to be an experience making a film that I’ll never ever forget." 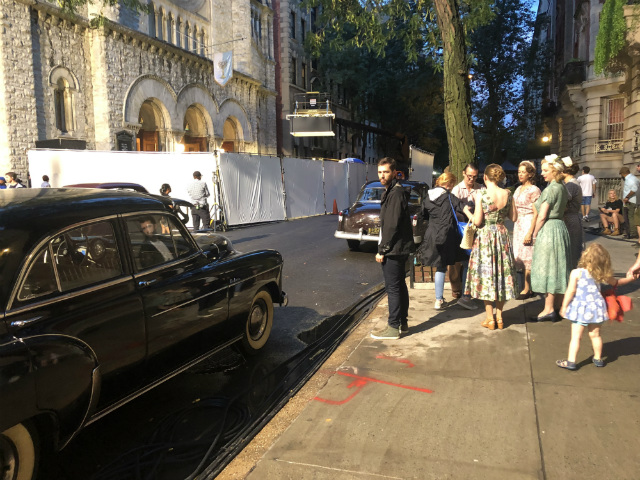 Extras outside the shoot at W 107th Street (Ben Yakas/Gothamist)

Below, you can see clips from the filming that happened at West 107th Street, between Broadway and Amsterdam, where Spielberg was seen shooting Elgort singing "Maria."

Sound on. West Side Story shooting on the upper west side. My favorite musical growing up. So glad I got hear and see this being remade by Steven Spielberg. #westsidestory #stevenspielberg #maria

Ansel Elgort on the set of West Side Story with director Steven Spielberg pic.twitter.com/JGXgDsvPLj